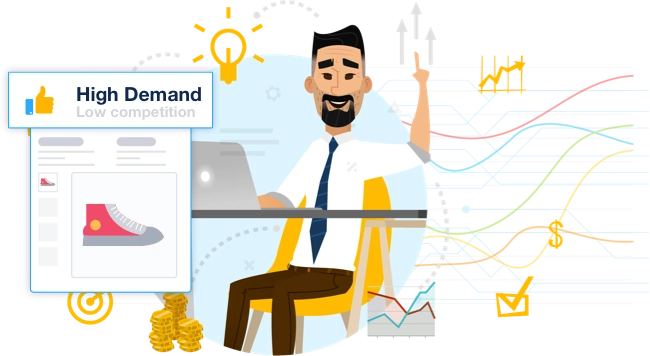 Create a Business
on Amazon with IO Scout

What is Amazon Prime Day?

In honor of the 20th anniversary of the biggest e-commerce platform worldwide, since it was first launched in July 1995, Amazon created first Amazon Prime Day on July 15 in 2015. This one-day sale event was created only for exclusive Amazon Prime members offering the best sale deals in the world. Amazon has many sales, but Prime Day is like the Super Bowl of Amazon, and one of the favorite retail holidays for both sellers and Amazon's customers.

On Amazon Prime Day, customers get access to sitewide discounts with the most significant price drops on a wide range of products from the Echo Dot to the new MacBook Air . Many customers wait for this one-time-in-the-year opportunity to purchase items they were checking on for quite some time.

Since the first Amazon Prime Day made a huge success, Prime Day became an annual tradition that has expanded to several other countries besides the US, such as Japan, Mexico, Spain, Austria, and others.

Also, the duration of Amazon Prime Day evolved over time. When it was first celebrated, this retail holiday lasted for one day only. In 2017, Prime days lasted for 30 hours, and in 2018 this ''day'' lasted for 36 hours. In 2019, Amazon celebrated the longest Prime Day in history that lasted from July 15 through the last second of July 16, making it 48 hours long.

Due to the happenings worldwide with the COVID-19 pandemic , the date for Amazon Prime Day in 2020 is still unknown. Online shopping commerce got profoundly affected by the ongoing COVID-19 pandemic, like all other industries in the world. Amazon is overwhelmed with buyer orders, and they had to stop some of its transportation services to fulfill orders. Even some of the Prime membership benefits such as one-day or even two-day shipping are no longer possible for most of the buyers. Many Prime members are now canceling their memberships, and many frustrated customers release their anger on social media because of shipping delays, unexpectedly canceled orders, and lost packages.

Like no one else, Amazon couldn't predict this situation, and everyone should be patient enough. Pandemic is nothing like a holiday rush, and like everybody else, Amazon got caught in the middle of it without a chance to prepare. CEO and Amazon founder stated: "Unlike a predictable holiday surge, this spike occurred with little warning, creating major challenges for our suppliers and delivery network."

Despite the problems caused by the pandemic, 67% of Amazon's customers in 2020 are Prime members, while last year, there were only 59%.

However, Amazon Prime Day in 2020 isn't canceled, it's postponed for October . It will most probably be in the early days of October, to make space between Prime Day and Black Friday .

Will there be an Amazon sale before the delayed Prime Day?

Yes, the Amazon device sale was organized on June 17, when customers had a chance to purchase popular Alexa devices for a great deal! Also, Amazon is planning a huge summer sale to get rid of all excess inventory and clear their storages before summer is over to prepare them for a holiday season.

There are speculations that since Amazon has problems with order fulfillment, some of its rivals have received more orders than usual and grown their business more. Amazon will probably use the Summer Sale to win back all buyers who have gone to different retailers. Amazon hasn't confirmed or denied this speculation, but because all other retailers are preparing their traditional July sales, it seems quite inevitable that Amazon will make the same move.

Should you wait for the Prime Day 2020 deals?

At this moment, Memorial Day is the only holiday that stands between customers and Amazon Prime Day in 2020. This situation draws a question whether it is worth it to wait until the Prime Day comes, or buyers should purchase certain items if they are on sale right now. There are lots of great deals available right now, and if you come across a deal that works for you, go for it!

For example, there is an excellent deal if you purchase two new Amazon Fire HD 8 tablets. Still, as the Amazon Prime Day approaches, it makes more sense to wait for it, because this day is famous by the unbelievable deals Amazon offers on that day.

Prime Day is all about excellent Amazon deals, so logically the best deals are on Amazon devices. Amazon launched three next-generation Fire HD 8 tablets recently, including the all-new Fire HD 8 for Kids, Fire HD 8, and Fire HD 8 Plus. Prices for these devices vary from $89.99 to $139.99, and you can save up to $70 if you order two of these great devices at the same time. With this, buyers can have a glimpse of what deals will be available on Amazon Prime Day in 2020.

The following list contains some of the best deals Amazon offered in the previous year on this great day:

What are the best Prime Day 2020 laptop deals?

Amazon always offers great deals on laptops for Prime Day. This year, plenty of jaw-dropping deals for laptops will be available. We expect to see great deals on 2020 Dell XPS 10th generation chip laptops and deals on the latest 2020 MacBook Air. Recently the latest MacBook Air was on sale for only $899, and we expect a similar deal on Amazon Prime Day in 2020.

What are the best Prime Day 2020 Whole Foods deals?

Whole Foods have a significant part in Amazon Prime Day. Members of Amazon Prime have an opportunity to win $10 of Amazon credit that can be spent on Prime Day by purchasing Whole Foods for $10 or more. This offer was one of the most popular Amazon deals in the last couple of years.

Why is this deal so popular? Simply because with the $10 credit, you can make any great Prime Day deal even better! The credit you get, you can use to reduce prices on Amazon Prime Day even more.

Once, the Fire TV Stick was available at $19.99 after the credit was applied. On another Prime Day, the Echo Dot's price dropped at an incredible $24.99 with $10 credit applied.

Amazon also has many other great Whole Foods deals on this retail holiday, such as 25% to 50% off "summertime favorites" such as wild-caught sockeye salmon, organic cherries, and apple pie.

All Prime Day deals are available only for Amazon Prime members, but in case you still haven't subscribed, you can sign up for Amazon's 30 days Prime trial version. This is Amazon's encouragement to show you what benefits you can gain with their Prime membership, and if it still seems too expensive, you can quit any time before the trial period ends. If you don't cancel the subscription, you will be charged $119 for the entire year as an Amazon prime member.

Amazon created a special membership plan for college students, which costs 50% less than the original subscription. For only $59, Prime students will be able to enjoy all perks this membership is offering, and all deals will be available to them. The best part about Student Prime membership is that it is entirely free for six months instead of 30 days! Students can use all benefits and offers completely free for six months. Also, Amazon has Off-to-College Store, where students can find great deals and discounts on all products from laptops to dorm room stuff.

How to shop on Amazon Prime Day?

Amazon has a Prime Day hub where you can find all deals in one place. If you use your mobile phone to surf the internet and do shopping, download Amazon mobile app, which is available for Android and iOS, to get Amazon Prime Day 2020 deals. In case you own the Fire HD tablet or any other Alexa-enabled Amazon device, you don't even have to move your finger. You can simply request Amazon's voice assistant to help you purchase Prime Day deals. These devices will help you find any available deal that fits your criteria.

If you shop from smile.amazon.com , you will support some higher goals with your purchases, because Amazon will donate a certain percentage of your shopping to the charity you choose!